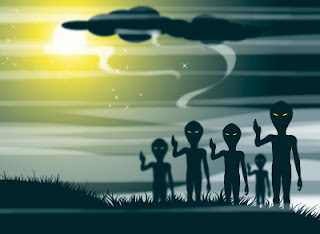 image by Simon Howden via freedigitalphotos.net


I have a friend who knows a guy
that knew a girl who lived by
this guy Otiose we called Otis
who thought that real life could kiss...

He said fairytales can and do come true.
Credit's there to make life easy for you.
No need to worry about tomorrow.
Risk and buy joy now to squash sorrow.

For a time his plans seemed to be working out.
The stock market showed him love for a bout.
He bought himself a really big fancy house
which he liked to lounge around in like a louse.

Then one day aliens invaded the earth
and took everything that he had of worth
and his insurance refused to reimburse him
and creditors would no longer lend on a whim.

Otiose hadn't bothered to read the fine print,
which would have given him more than a hint.
If he too had believed aliens might steal his stuff,
he would have demanded a warranty more buff.
If Otiose had bought with cash and not credit,
he might have had his own money to re-get it,
but when those aliens took his beloved computer,
he learned credit and fine print are joy looters.

Each Thursday I post an original rhyme
inspired by thought provoking news of the time.
This week I learned a certain computer warranty
has no alien invasion coverage for thee.

Rhyming or not, I would like a lot to hear the thoughts my words brought...